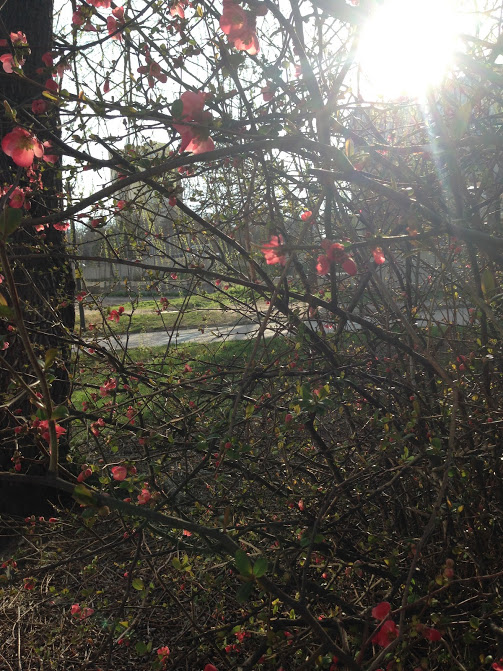 It was the spring of 2016 and I was just beginning to enjoy the blooming cherry blossom flowers of the “not-so-foreign-anymore” Central Asian landscape around me. Although the landscape was an urban one (with tall apartment buildings and metro stations), there were arid mountains in the distance and the sound of farmers selling fruit at the local bazaar. My roommate and I were walking through our neighborhood to a friend’s house for dinner. We had just moved to our new country about eight months before, and as we walked to our friend’s house I commented, “I really like living here! I think I’d be really disappointed to move to another country at this point”. As the words came out of my mouth, I was filled with reflections about all the things I had seen God do and teach me so far in this new context. I felt thankful and in awe.

That night after dinner and laughs with our friend, I realized how blessed I was to be thriving in a new job, a new language setting, and in a new country. We were sitting in my friend’s apartment. Everything was fine and seemingly peaceful– until we heard a loud noise in the distance that we couldn’t ignore. What could that have been? Why were our phones suddenly filled with messages of questions and concerns from friends around the city? Our visit had lost its feelings of peace and was beginning to fill with suspense, anxiety, and fear.

Earlier that year, about three months after I moved to my new city, the first bombing had happened. It was in a “far” part of the city, where I normally didn’t go. About four months after that, a building close to my workplace was bombed. “It was probably a random occurrence…Only a few were injured…..That probably won’t happen again….” were all things I found myself rationalizing my fears with.

Friends and family back home were rightly concerned about me and my new city. The embassy of my passport country frequently issued “warnings” of places and situations to avoid in the city. I followed the embassy warnings and did my best to assure my loved ones that I was “okay” and that things were going well, despite the stories they heard about my city on the news.

I thought the troubling events in the city “had blown over” and “quieted down”. I was ready to live in and work in and enjoy my new city without embarrassing warnings and fears that I found myself constantly trying to rationalize. This optimistic attitude was the one with which I entered my friend’s house that night. The loud, unexpected blast we heard stopped all thoughts of positivity. As my mind began to race and my friends started to panic, I realized the truth that something had gone terribly long.

The “blast” that night was the biggest bombing our city had seen up to that point. This bombing was in the city center – the most popular “hangout” spot for young adults. It was also a “hub” where numerous people commuted daily on their way to work or home. The city center was a place through which I had traveled many times.

This bombing was the third in a row that in the city had suffered through that year. And it was my first year living in a new country away from my family. Almost 100 people had died in the bombing. I was still alive and yet…..

All of my defenses and sources of “security” were torn down.

What was God doing? Why did he have me here? Was I even supposed to be here anymore? Throughout this first year, I had experienced many trials with language, relationships, new feelings of intense homesickness, and raw fear. At times I had felt despondent and purposeless. Friends and family and hinted that if it didn’t “work out” for me in this new place, I could just come home. Were they right? I wondered if moving to this new city and attempting to settle there was a mistake. At the same time, I knew this was what the Father had been asking me to do for. I wasn’t sure what to do, but I knew I could only look to the Father for guidance, direction, and peace (2 Chron 20:12).

At this point, my heart and mind were “naked and exposed” before God (Heb 4:13). I was unsure about how to move forward–was I to stay in this situation I knew God was calling me to? Yes. But I wondered what normal life would look like in this seemingly “tumultuous” climate. How could I assure myself and my loved ones that I was to stay in this situation. I knew I couldn’t do this in my own strength. God was uncovering my rational defenses to reveal my heart and draw my closer to Himself.  God gently lead me to to cast myself on His mercies–mercies that were new every morning (Psalm 55: 22, Lam 3:23).

Over the next weeks and months, God put wonderful and refreshing friends in my path. Through them, God took my questions and brokenness from that year and those events.

Once again, I found myself walking to another friend’s house on a warm spring evening. This time, I had just ridden the minibus from work and was admiring the bright red rose bush outside my friend’s apartment as I approached the door. This was the be the first of several meetings with my friend as she was going to help me “debrief” and work through the traumatic events of the previous months. These intimate talks with friends who had lived through some of the same experiences, yet continually looked to the Father provided me with strength and healing in ways that I had never before realized I needed.

This was a time for me to be torn down. This time pointed me to God – the only One who could ever build me up again.

Author Bio:  AJ is a lifelong learner, teacher, and explorer of new things and places. Currently, she is living and working overseas. One of her main goals is to use her talents and gifts to be a blessing. She enjoys cats, books, travel, music, tea, and sports.